What is Ordinary Time? 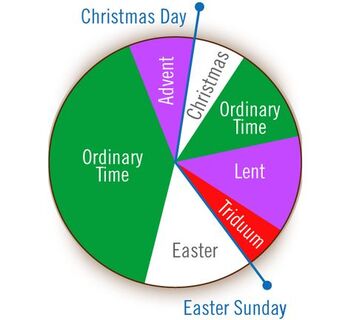 Why is Ordinary Time called “Ordinary”? Let’s take a step back into fifth grade math class: Your teacher likely at some point in math class taught you that there were three expressions of numbers, to wit, cardinal numbers, nominal numbers and ordinal numbers.


Built to Order. Keeping the above number-types in mind, when term Ordinary Time is used in terms of the Church year, its meaning is tied to the concept of ordinal numbers. Ordinary Time refers to “ordered” or “sequenced” time. Thus we have the “2nd week in Ordinary Time,” “the 30th week in Ordinary Time,” etc. It refers merely to fact that the weeks are counted up in order, and are in reference to no season (i.e., they do not order time to/from Easter or Christmas, but rather just count, in ordinal form, the weeks that exist outside of any Church season (i.e., Advent, Christmas, Lent, Easter).

Here are some other items regarding this period of “Ordinary Time”:

Color for Ordinary Time. The liturgical color of Ordinary Time is green. You will see the priests commonly wearing green vestments during Ordinary Time, unless a special feast is being observed. Why Green? In the early 12th century many practices in the Church became codified, and we find the first talk of “liturgical colors” by Pope Innocent III. Canons (rules) were in place by that time designating proper use of colors related to vestments. Green was used on Sundays and ferial days (weekdays of Ordinary Time without a special feast or holy day/saint day), as is still case today, because it was deemed to be "midway between black and white.” Back in those day, black was used in penitential seasons, while white was use for feast days of all saints except martyrs and other joyful days.

It’s not Easy being Green. Occasionally, you’ll see a Priest somewhere on St. Patrick’s Day wearing green at Mass – clutch the pearls my friends, that is incorrect! St. Patrick’s Day invariably occurs during Lent when the color violet is to be worn, however, if you are at a Mass specifically observing St. Patrick’s feast day (rather than the Lenten weekday), and since St. Patrick was saint who was not a martyr, the color worn at Mass is, properly, white. It should also be noted that there are also a dozen holy days, which, if they land on a Sunday in Ordinary Time (some always land on Sunday), preempt Ordinary Time’s green. On those special Sundays green vestments goes the way of dial-up internet, Crystal Pepsi and Microsoft Zune, and are replaced by vestments of the liturgical color of the holy day being observed. These are days like the Transfiguration, Trinity Sunday, Corpus Christi, All Souls Day, etc.

The Long Run. Ordinary Time can be either 33 or 34 weeks long (which is about same length of time I felt going by when I watched the endless movie, “Seven Years in Tibet”). It occurs in two segments: from the Monday following the Baptism of Our Lord until to Ash Wednesday; and then again from the Day after Pentecost to the day before the First Sunday of Advent. This makes it the largest period of time during of the Liturgical Year.

Whenever we enter this season, it always brings to mind an FDR biography entitled, “No Ordinary Time.” Far from adopting that as protest cry against the season, I am reminded, that as Catholics, with Jesus Christ as our Savior, and Mary as our loving Mother, there is no time in our faith life that is truly ordinary. If we are living our faith our time is never ordinary, it is blessed.